“I baptize with water those who repent of their sins and turn to God. But someone is coming soon who is greater than I am—so much greater that I’m not worthy even to be his slave and carry his sandals. He will baptize you with the Holy Spirit and with fire. He is ready to separate the chaff from the wheat with his winnowing fork. Then he will clean up the threshing area, gathering the wheat into his barn but burning the chaff with never-ending fire.”

But Jesus said, “It should be done, for we must carry out all that God requires.” So John agreed to baptize him.

After his baptism, as Jesus came up out of the water, the heavens were opened and he saw the Spirit of God descending like a dove and settling on him. And a voice from heaven said, “This is my dearly loved Son, who brings me great joy.”

There is s much to learn in today’s words so don’t run away too soon!

Baptism: To start with, John wasn’t just baptizing anyone who showed up and asked they first had to make a commitment to change their lives from the inside out. That meant words alone weren’t going to save them, they had to believe it in their hearts. The Apostle Paul explained this clearly when he said:

We also learned in a previous lesson these were people who were ready for a change, they saw the futility of their lives trying to live by the law alone, or by just trying to be good enough. But who defines the accuracy of “good enough?” Certainly not any man! God says this:

Their only option was to surrender their hearts to the good news of the coming Messiah and repent of their sins. With hearts committed to this truth, they stepped in the water to outwardly demonstrate their inward decision (commitment).

In case you weren’t sure, Baptism doesn’t give you salvation, however, it is your first public act to show others you are a new person in Christ. If you have refused baptism, ask yourself why? Maybe it’s because you are still putting more importance on what others think of you than your relationship with Christ? If you have been saved, but have refused baptism, I encourage you to take that first step of obedience. There is no better visual for washing away our sins than going under the water, then being raised to walk in the newness of life with Christ, than there is with baptism.

Jesus chose to be publicly baptized, not because he needed forgiveness from sins (He was sinless), but as an act of obedience to God. It was also his way of showing support for what John was doing, and it was His inauguration into public ministry. In addition, He wanted to identify with the people who had repented and returned to God.

Jesus, the perfect man, accepted baptism in obedient service to His Father, and to also align himself with us! How awesome is that?

John was initially confused when Jesus asked to be baptized because:

But Jesus helps John understand the wisdom of baptizing Him when he tells John “we must carry out all that God requires.”

That sweet truth should be all we need to motivate us to get baptized. If you have had shame, or embarrassment, or don’t want to be the center of attention (sadly, the older we get the more likely our feelings get in the way of our obedience!), let me boldly say, Satan is stealing a huge blessing from you! Don’t let that happen!

Are you chaff or wheat?

There will come a day when God will “separate the chaff from the wheat with his winnowing fork.” Chaff is the hull or outer husk around wheat and once it was separated with that large pitch fork, it would be gathered and burned because it had no value. The wheat is the part of the plant that has value and is gathered and saved.

This description for separating wheat from chaff is often used as a picture of God’s judgment of believers (wheat) and non-believers (chaff).

Which am I? Will I be saved or will I be burned? Will I be used for nourishment, and help produce new wheat? Or will I just exist, producing nothing to increase the harvest, and eventually wither away and die? These questions are very compelling, aren’t they? I pray you ask them of yourself, just as I am doing.

Jesus loves us and we bring Him joy!

Finally, “After his baptism, as Jesus came up out of the water, the heavens were opened and he saw the Spirit of God descending like a dove and settling on him. And a voice from heaven said, “This is my dearly loved Son, who brings me great joy.”

Beloved readers! God doesn’t just love Jesus, He loves us! Jesus wants to show us the same approval He received from God and His precious hand is extended for us to grasp firmly. He never tires of holding out His hand waiting for us to take it and say:

We see when Jesus committed to baptism that obedience led to receiving the Holy Spirit, and God’s pleasure and joy. I want that too, don’t you? 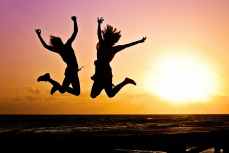 Father God, I am so grateful I said “yes” to your life saving salvation and obediently followed with baptism. Thank You for the gift of Your presence and guidance that followed my obedience, and may I continue to honor You by the harvest I produce. Lord, it’s been a difficult week and I know I have failed you in my weakness and I surrender my sins to you right now. I thank You for Your forgiveness. Father God, your eternal hope is my endless highway and I thank you for always being ahead of me. I pray this in the powerful name of Jesus. Amen.